Though to prepare this sarson ka saag recipe it takes some time but ultimately it tastes very delicious.If you want curry in a hurry you can clean the greens one day before and keep them in airtight containers in a fridge.

To cook authentic sarson da saag you have to follow step by step instructions.

Note : if you are in a hurry, feel free to click on the following links to check your desired topic.If you’d like to see our in-depth step by step recipe preparation keep reading!

What is sarson ka saag?

Sarson ka saag or sarson da saag recipe is a creamy, spicy curry made of mustard leaves, spinach, and radish.

This winter special sarson ka saag recipe is a famous punjabi curry where ” Sarson ” is a hindi word of ” Mustard ” and ” Saag ” refers to any ” green leaves ” ; thus, this is traditional Indian recipe of mustard leaves.

What to serve with sarson da saag?

How to make sarson ka saag?

second one is making sarson ka saag and third one is tempering for sarson da saag.. 3. Next in a pressure cooker add green leaves , all chopped veggies , 2 teaspoon red chili powder and pinch of salt. 5. Now cover and pressure cook saag in medium flame for 10 min until saag are soft. 6. After that carefully open the lid, you will see all greens, onions, radish, tomatoes are cooked well. Let rest the mixture cool to room temperature 1. Now to make sarson ka saag pour this cooked greens along with some water in a blender to make fine paste. 2. Next pour this saag puree in a deep bottom pan and cook in low flame for at least 35 min. 3. In between stir occasionally, such that sarson ka saag doesn’t stick at the bottom of pan. 4. After that add 2 tablespoon maize flour or gram flour and mix properly for another 10 min. 5. At this stage you will see sarson da saag becomes thick and bubble on top of curry. 2. Then add 2 dried red chili and saute in low flame till cook properly. 5. Cover and simmer sarson da saag for another 10 mins. Here is a quick overview of all the ingredients of sarson da saag including quick step by step preparation of sarson ka saag recipe shown in the recipe card.

how to make sarson ka saag? 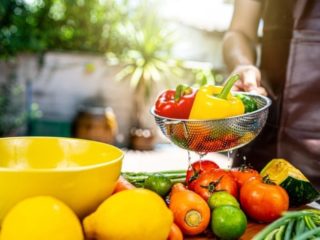 Kitchen tips : How to wash fruits and vegetables How to make manchow soup