Rajma recipe is one of the delicious vegetarian curry dishes in India where boiled red rajma beans or kidney beans are slowly cooked in creamy tomato onion gravy flavour with a few Indian spices. This punjabi rajma recipe is popularly known as rajma chawal recipe as it is often served with chawal or rice in north India. In this post, you will learn how to make rajma masala? This rajma masala is also known as kidney beans curry which is not only tastes very delicious but also very easy to cook at home, I am sure you can cook delicious rajma curry if you follow each instruction properly mentioned below.

What is rajma masala

Rajma masala is one of India’s most delicious vegetarian curry dishes, where pressure cooked red rajma or kidney beans cooked in buttery onion-tomato gravy flavoured with a few Indian spices and garnish with cream.

What to serve with the rajma recipe

Rajma chawal recipe is the best combo dish you have to taste. Otherwise, you can serve plain roti, naan, and jeera rice with this rajma recipe.

| check the below recipes

How to store rajma curry

As we use cream and tomatoes so you can safely store this rajma curry in the refrigerator for at least 2 to 3 days.

But before using make sure you reheat this rajma curry with a dash of water then serve it.

How to make rajma masala

1. At first, for cooking red kidney beans wash thoroughly red rajma dal or kidney beans in water then soaked in sufficient water for at least 10 to 12 hours, until they absorb water and become larger size. 2. Now pour the soaked rajma into a pressure cooker, sprinkle a pinch of salt, and pressure cook for 7 to 8 whistles in medium to high flame and check whether rajma beans mashy or not, if not give another 2 whistles. 1. Now before making rajma masala cut 5 to 6 tomatoes into quarter shape, deseed them then make a puree.

2. Next for cooking punjabi rajma masala melt 4 tablespoons of butter in a large pan on low flame. 5. Now pour 5 to 6 tomato puree and mix it properly with the rest of the ingredients for another 3 to 4 min in medium to low flame. 7. Now saute all of them together for up to 10 to 12 min in medium to low flame until the gravy thickens and leaves the side of the pan. 2. Mix all of them properly with the rest of the spices. 3. Next cover the pan with a lid and simmer this rajma curry for 35 to 40 min on low flame. After that period check whether rajma is cooked and becomes soft, otherwise pour more water and cook for more time. 4. Now, sprinkle 1tsp Kasuri methi and mix them together. 6. Finally for add 60 ml cream to this rajma curry. 7. Gently mix them together for another 3 to 4 min on low flame and our punjabi rajma recipe is complete. Here is a quick overview of all the rajma masala ingredients including quick step by step preparation of the punjabi rajma recipe shown in the recipe card.

How to make rajma masala 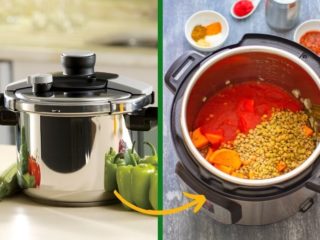 How to use a pressure cooker | Tips for beginners